Greetings from the Headtail Connection!

If you haven’t read any of the holiday guides to dancers, you might want to catch parts one and two. All done? Ok, well, this year we’re taking it to the expert level as we try to distinguish between British and American contemporary and social dancers, and I give you some handy transatlantic hints for Christmassing in these two countries.

The place to be: London

The place they actually are: The southwest and midlands with their parents

The song: Merry Christmas Everybody

The phrase: “What are you doing on boxing day?”

Do NOT say: “Won’t everything be better after Brexit”

TRANSATLANTIC REACTION
Holy hell America you don’t even know what a mince pie is, do you? They’re 17p each at Tesco…. You don’t know what Tesco is either. Ok then. They’re small pies filled with mincemeat, which is not made of meat, but is rather a deliciously sweet concoction of dried fruit, sugar and brandy. Making these for myself in the states has been quite a quest, since you can’t buy a jar of mincemeat, nor can you buy a number of the ingredients to make mincemeat in a grocery store (supermarket). A bucks fizz a mimosa, but posher, because the queen drinks them at Buckingham palace.

The place to be: SCOTLAND!

The place they actually are: Zone 3 and 4

The song: Fairytale of New York

The phrase: “Shall we go out for a bit of a walk?”

Do NOT say: “We should go shopping on Oxford Street Tomorrow!”

TRANSATLANTIC REACTION
American Christmas carols still seem to me to be a little… saccharine. Sure we like our traditional tunes, but we’re more used to hairy shouty men and drunken swearing, which explains why this song from the Pogues remains endlessly popular. A Christmas cracker is a small cardboard tube, crimped to leave a handle at either end. When you and a friend pull it apart there is a GIGANTIC bang, releasing a small trinket, a terrible joke and a paper crown, which you must then immediately put on for the rest of the occasion. We cover our Christmas puddings in alcohol and set them on fire – ‘nuff said. (The video at this link may be one of the most British things on the internet). 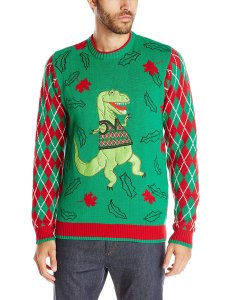 The place to be: New York

The place they actually are: The relentless suburbia of a flyover state

The phrase: “So I’m driving to my parents today, and then leaving at three to see my boyfriends’ parents and then driving back here tomorrow for the Christmas party and then I’ll probably go to Iowa for a bit and then…”

Do NOT say: “Just think, it’s been a year of Donald Trump!”

TRANSATLANTIC REACTION
American Christmas is not so much one holiday as the tail end of the sugar-soaked glut of celebration that starts somewhere around Thanksgiving and rolls on into the New Year. The ugly sweater is a Christmas-themed woolly jumper (except they don’t call it a jumper) that people wear somewhat ironically, and which is sold by the rack under that name in clothes stores and thrift stores (charity shops) all over the place. Sugar cookies are sweet, pale biscuits that would be overlooked if they didn’t come with a can of violently coloured frosting (icing) and a tub of sprinkles for you to decorate them with.

The place to be: Lindy Focus

The place they actually are: Freezing cold

The drink: Whiskey and egg nogg

The song: Baby it’s cold outside. “Only with the remade lyrics.” “Well ACTUALLY…”

The phrase: “So what events are you doing next year?”

Do NOT say: “What do you think of the turn to idiom dancing?”

TRANSATLANTIC REACTION
Green bean casserole… I still don’t understand. You take a perfectly good vegetable, cover it in a can of condensed mushroom soup, and bake it topped with potato chips? Or something? It sounds like student cooking at its drunken worst, and yet it gets served with such ubiquity that I think it’s something of a national treasure. Now egg nogg on the other hand I can get behind: milk, cream, sugar, and whipped eggs and spices. British folks reeling back in horror will just have to trust me that it’s delicious, especially when spiked. The fairy lights are more tasteful than TV led me to believe. American Christmas carols are slightly dodgy, flamboyantly well intentioned, and – quite frankly – drunk.

Merry Christmas, wherever and however you do or do not celebrate!